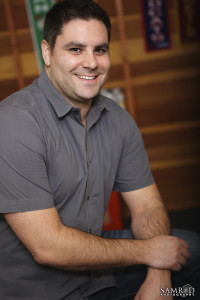 Erik Olsen was born in La Crescenta (suburb of Los Angeles) and now lives with his recently married wife in Hermosa Beach, located in the South Bay portion of Los Angeles County.  Like so many LA natives, he grew up as diehard Dodgers and Lakers fan. Since LA has not had a football team for 20 years, Erik has mostly been a fan of the sport — or a fan of his fantasy football players — not necessarily of any specific team.  That is, until he got married.  His wife is from Chicago and a HUGE Bears fan, so Erik has kindly adopted that team.  Could be worse… She could have been a Tampa Bay Buccaneers fan.

Recently, Erik has grown to loathe the Arizona Diamondbacks due to the intense dislike between them and the Dodgers.  And, of course, despising the San Francisco Giants is always there. Lately, he has lost respect and grown to dislike Dwight Howard for how he left the Lakers.

Erik played a number of sports in high school, including baseball, basketball, and football. He currently is an avid softball player. Erik’s lifetime sports ambition includes throwing out the first pitch at a baseball

Professionally, Erik works as an aerospace engineer. He enjoys traveling, hiking, and attending as many Dodger games as possible.